We Demand Revision of Minimum Wage and Fitment Formula 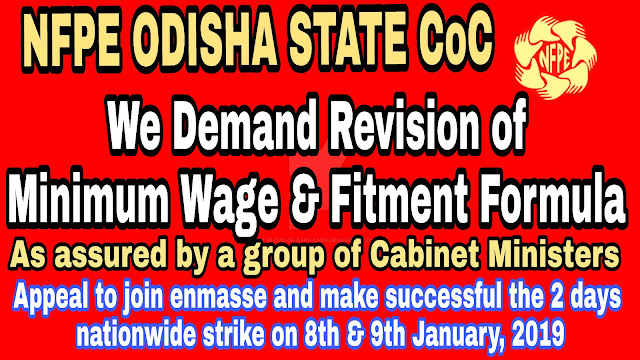 We demand to honour assurance given by Group of Ministers to the Leaders of National Joint Council of Action (NJCA) of Central Government employees regarding increase in Minimum Pay and Fitment formula for Pay revision from 01-01-2016.

Most of the recommendations of 7th Central Pay Commission (CPC) are retrograde, especially regarding Minimum Pay and Fitment formula. The NJCA representing entire Central Govt. employees had given notice for indefinite strike from 11th July 2016 demanding modifications in the recommendations of 7th CPC. To avert the inevitable strike action, a Group of Ministers consisting of Shri. Rajnath Singh, Home Minister, Shri. Arun Jaitley, Finance Minister and Shri. Suresh Prabhu, then Railway Minister held discussion with NJCA leaders on 30-06-2016 and assured that the main demand of increase in Minimum Pay and Fitment formula will be considered favourably and for that purpose a High Level Committee will be constituted by the Government which will submit its report within four months time. This assurance was confirmed through a press statement issued by Finance Ministry on 06-07-2016. Even though two years are over since then, neither High Level Committee is constituted by Government nor the assurance given by Group of Ministers implemented.

Entire employees and pensioners feel let down and betrayed. Now Government has made it clear in the Parliament that at present, no such proposal for increase in Minimum Pay and Fitment formula is under consideration of the Government.