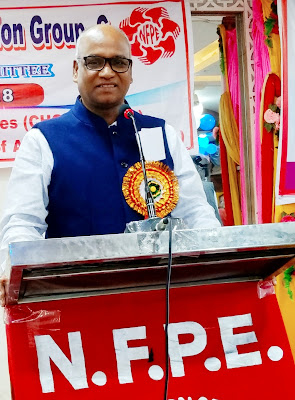 On behalf of Odisha Circle, I would like to record my sincere obligation first of all to the Comrades of Jhansi Division for shouldering this vast responsibility of conducting our Central Working Committee Meeting in Jhansi in such a nice and organized manner. Simultaneously, a grand salute to this historic land of Jhansi which symbolises strength, valour and courage not only of queen Laxmibai but the people of undivided India through the Sepoy Mutiny of 1857, the first struggle of Indian Independence.

Comrades ! Standing on the land of Jhansi, when we are organizing our Central Working Committee meeting in a critical juncture just before the 2 days nationwide historic strike on 8th and 9th January, 2019, our discussions may be incomplete if we fail to remind Lord Dalhousie, the Governor-General of British East India Company from 1848 to 1856 and who is also treated as the father of India Post.

Before discussing on the core issues as per agenda, I feel it quite necessary to discuss two important aspects related to Lord Dalhousie since we are in Jhansi.

Lord Dalhousie, as the Governor-General of British East India Company devised the Doctrine of Lapse, a policy that was based on the idea that in case a ruler of any dependent princely state was either "manifestly incompetent or died without a male heir, then the right of ruling over the State reverted or 'lapsed' and such States would automatically be annexed. History says, as many as 31 princely states including Jhansi were annexed under the doctrine. This is one aspect.

The other aspect is that Lord Dalhousie is also treated as the father of India Post with adoption of Indian Post Office Act in 1854.

In his Minute dated 30th December, 1851, he has clearly stated “It makes the Post Office what under any other system it never can be the unrestricted means of diffusing knowledge, extending commerce and promoting in every way the social and intellectual improvement of the people”. To prove this statement, honestly, if we search about an organization which provides door to door service in India, the land of heterogeneous racial, lingual, religious, and social culture upholding its rich cultural heritage through religious pluralism with Hindus, Muslims, Sikhs, Christians, Budhists, Jains etc. sharing their sorrows and happiness in 1635 rationalized and 234 identifiable mother tongues  inclusive of 22 constitutional languages and protects the national unity, social cohesion, secular and federal structure and democratic ethos, then certainly, the name of India Post comes to our mind. Competently assisting the rulers, elite and mercantile community in its various forms in ancient and medieval times, it has conveniently served both the British rulers and general public in modern times as a forceful organization in raising national and political consciousness and proving itself as the world’s largest postal network with 155000 post offices and one of the biggest Central Govt. Organizations.

But regretfully, in the name of modernization, computerization and digitization, we invited corporatization of India Post on 1st September, 2018 in the name of India Post Payments Bank Ltd. Soon after inauguration of IPPB Ltd, our Hon’ble Minister declared coming up of India Insurance Ltd which reminds us the implementation of the draconian recommendations of the Task Force Committee with constitution of India Parcel Ltd and two other companies, in toto, 5 holding companies under the Department of Posts.

If we correlate these two aspects devised and stated by Lord Dalhousie, we will find that corporatization is tactfully introduced in the Department of Posts and we are being annexed phase wise to the negative recommendations of Task Force Committee which will take away the sovereignty of the Department of Posts. At this moment, I am compelled to think, “Are we manifestly incompetent or going to die without a male heir?”

My sincere appeal to the house to take a right decision at this moment to save the autonomy of this largest postal network first and then to struggle for all other genuine demands.

Apart from presenting the issues confronted by P-III employees related to FSI, CSI, IPPB, the following aspects were also stressed upon.