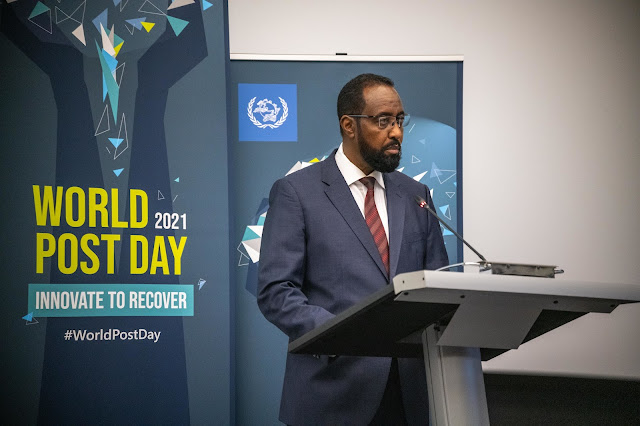 The celebration brought together experts from posts and governments around the world in a hybrid ceremony to discuss how the postal sector has played a key role in society during the global pandemic.
Speaking at the event, Director General, Bishar A. Hussein, said, “Posts have proven their capacity to rise to any occasion and continue to offer services with remarkable levels of resilience during COVID-19. The pandemic also forced the sector to become creative and develop new ideas and methods to serve customers.”
“Together, let us learn the lessons arising from the COVID-19 pandemic, and understand that innovation is not an accessory; it is the driving force behind recovery,” Hussein added.
Hussein was joined at the ceremony by Deputy Director General Pascal Clivaz who read out a message from UN Secretary-General Antonio Guterres, which applauded the resilience and commitment of essential postal workers during the pandemic. “We owe them our gratitude,” the message said.
The new chair of the Council of Administration, Isaac Gnamba-Yao representing Côte d’Ivoire, and of the Postal Operations Council, Jean-Paul Forceville representing France, also joined the ceremony virtually.
Following the speeches, the UPU celebrated the creativity and resilience of posts around the world through an interactive storytelling session. The session included messages from ministers and postal executives in Argentina, Denmark, Bangladesh, Cote D’Ivoire, Egypt, India, Malaysia, Mexico, and Viet Nam.
Micaela Sanchez Malcolm, Secretary of Public Innovation, Argentina, highlighted how the national post has become a central actor in the delivery of vaccines in Argentina. “We have already distributed more than 57 million vaccines,” said Malcolm in a video message.
Meanwhile, Bangladesh highlighted its role in financial services; India revealed its part in delivering government services; and Malaysia took the opportunity to tell the world about is new Mel Rakyat campaign which encourages Malaysians to send handwritten letters to their relatives or friends for free.
Following the storytelling session three award ceremonies were held. First, Poste Italiane’s dedication to postal security was recognized by the UPU. In August postal employees working in a sorting center outside Milan made a disturbing discovery – three bullets contained in a letter addressed to Pope Francis.
Vincenzo Aurelio, Head of Poste Italiane’s Relations with International Authorities and Organizations, accepted the award from the Director General. “This discovery is just a small tip of a much bigger iceberg, which is our corporate system for monitoring the postal flow and ensuring safety to employees and to the whole community at large,” Aurelio said.
The Director General then handed out awards for this year’s winners of the Integrated Index for Postal Development (2IPD). Swiss Post retained its first-place position thanks to stellar performance across all dimensions, including improvements in reach and resilience. This is the fifth time in a row Swiss has topped the rankings. Österreichische Post (Austrian Post) received second place, while Deutsche Post came third.
The final ceremony was for the UPU’s International Letter-Writing Competition, which is celebrating its 50th anniversary this year. To mark the occasion the UPU asked its staff to select the best letter among 50 years of winners. A letter written in 1978 by Mi-kyong Ryu from Korea on the theme, “The postman, my best friend” was given the top prize.
The World Post Day event was concluded with a special UPU staff appreciation ceremony, which awarded all UPU staff with an award to say thanks for their hard work during COVID-19. “I offer my sincere thanks to the employees of the International Bureau for their dedication during these difficult times. I am proud to work alongside them,” Hussein said at the ceremony.
Posted by AIPEU Group-C, Odisha at Monday, October 11, 2021