Members of the All India Postal Employees’ Union Group-C, Odisha Circle held a demonstration in front of the office of the Chief Postmaster General here on Wednesday pressing for fulfilment of their five-point charter of demands.

The demands included filling up all vacant posts of PA Cadre and HSG-I, HSG-II before implementation of cadre restructuring after giving one-time relaxation in recruitment rules, implementing CSI after RICT and after developing proper infrastructure, stopping harassment and victimisation under contributory negligence factor in the name of implementation of new schemes and to achieve unscientific target.

The demands also included stopping outsourcing, privatisation and contractorisation and declaring result of membership verification at the earliest.

Union circle secretary Bruhaspati Samal said that despite several discussions with the authorities of the Department of Posts at various forums, no steps have been taken to resolve the problems of the Group 'C' postal employees.

Even the assurances given by the department in the earlier meetings have not been fulfilled till now; and many issues raised by the union remain unsettled over years, he added.


The members threatened that if the demands are not fulfilled, they would opt for an indefinite strike in coming days.
Source : Odisha Pioneer, dated 26.04.2018 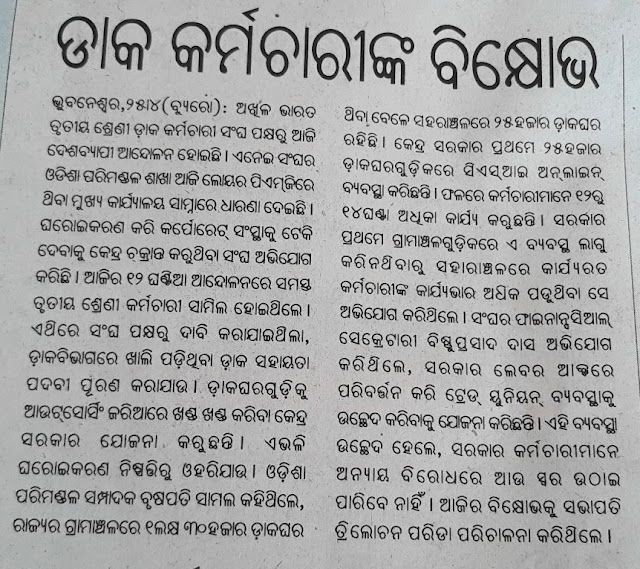