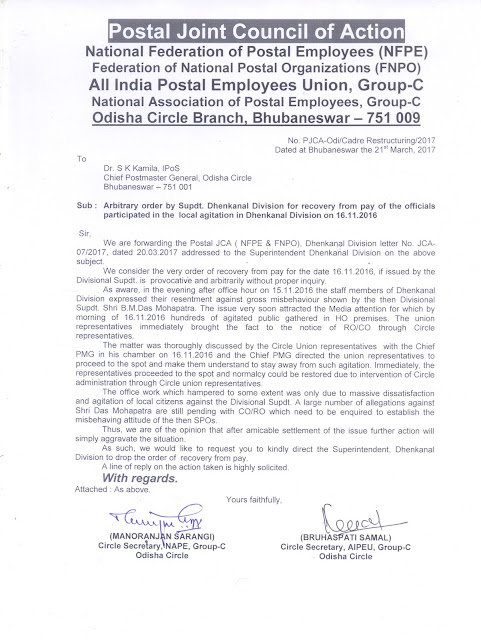 We consider the very order of recovery from pay for the date 16.11.2016, if issued by the Divisional Supdt. is  provocative and arbitrarily without proper inquiry.

As aware, in the evening after office hour on 15.11.2016 the staff members of Dhenkanal Division expressed their resentment against gross misbehaviour shown by the then Divisional Supdt. Shri B.M.Das Mohapatra. The issue very soon attracted the Media attention for which by morning of 16.11.2016 hundreds of agitated public gathered in HO premises. The union representatives immediately brought the fact to the notice of RO/CO through Circle representatives.

The office work which hampered to some extent was only due to massive dissatisfaction and agitation of local citizens against the Divisional Supdt. A large number of allegations against Shri Das Mohapatra are still pending with CO/RO which need to be enquired to establish the misbehaving attitude of the then SPOs.

Thus, we are of the opinion that after amicable settlement of the issue further action will simply aggravate the situation.

As such, we would like to request you to kindly direct the Superintendent, Dhenkanal Division to drop the order of  recovery from pay.

A line of reply on the action taken is highly solicited.

Attached : As above.
Yours faithfully,