Filling up these posts itself would contribute to reducing the raging joblessness that has haunted India in the past several years, but the government does not seem to care.

Under the Narendra Modi-led government’s tenure, where unemployment has reached record high levels, there are no new jobs; government posts that are already sanctioned are also not being filled, according to an investigation of data from various departments of the central and state governments. It was found that at least 30 lakh sanctioned posts under the central government (including those under various bodies and institutions run by the Centre) and an estimated 30 lakh posts under various state governments are lying vacant.
Filling up these posts itself would contribute to reducing the raging joblessness that has haunted India in the past several years. But he Modi government, which promised 2 crore jobs every year back in 2014, has in fact, aggravated the unemployment crisis. As the following table below shows, sanctioned but vacant posts amount to 9.10 lakh posts in central government ministries and departments; about 37 thousand posts in central universities, IITs/IIITs/IIMs/NITs and other central government-run higher education institutions, central schools (KVs), Jawahar Navodaya Vidyalayas; 8.53 lakh posts in primary schools in the states that are mostly funded by the central government; 1.68 lakh posts in the health sector; 1.76 lakh posts in the Anganwadi system; 2 lakh posts in the public sector banks; 1.07 lakh posts in the Indian Army; about 92,000 posts in the Central Armed Police Force (CAPF), as well as 5.31 lakh posts in the state police departments and judicial courts across the country, including the Supreme Court, High Courts, and more than 5,000 posts are vacant in lower courts. The number of posts lying vacant in various state government departments and ministries, if taken together, will be more than 30 lakh, according to the All India State Government Employees Federation (AISGEF).
VACANCIES UNDER THE CENTRAL GOVT AND STATE GOVTS 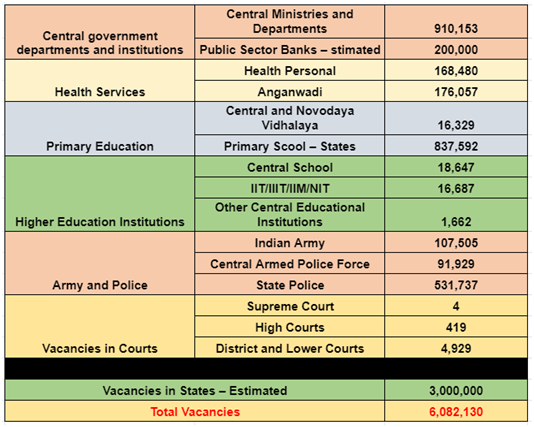 The seriousness of the Bharatiya Janata Party-led government at the Centre and the state governments about employment can be gauged from the fact that the number of vacancies has been continuously increasing year after year with no concrete step being taken to fill them.

CH Venkatachalam, General Secretary of All India Bank Employees Association (AIBEA), said that more than two lakh posts of class-4, class-3 and the officer cadre are vacant in banks, which the managements do not want to fill. By appointing employees on low wages through contract and outsourced means, the institutions are saving money although these temporary employees are made to work just like permanent employees. “In fact, due to the reduced strength, work load on each employee has gone up tremendously,” Venkatachalam said, noting that the employees were not able to finish their work on time, which has given rise to frustration, stress and mental pressure among them.

The bank business has increased a lot compared to earlier times, due to which there has been a significant increase in the work of the employees, including servicing of many government schemes that are implemented through banks only. In such a situation, it is better to have regular and permanent employees and therefore, it is necessary that the government and banks soon fulfill the more than two lakh vacancies, which are lying unfulfilled, so that the employees can work with efficiency, he said.

RN Parashar, General Secretary of the Confederation of Central Government Employees and Workers, said that in all the central government departments, various PSUs, banks, autonomous bodies such as IITs, IIMs, ISRO, and in many scientific research institutions, nearly 24 lakh posts were lying vacant; this means that 30-35% of all posts are vacant in various department and in some departments, the figure goes up to 40-50%.

He further stressed that the Modi government at the Centre had said “Minimum Government, Maximum Governance,” which people thought would perhaps translate to a smaller cabinet that would work hard. However, now people are finding it to be a “joke” because the definition of the slogan according to Modi ji is that “government departments and institutions should be less in number, employees should be less and more and more work should be taken from them and the rest of it should be outsourced like bonded labor, which does not need any job security nor any social security,” Parashar said. He further added that what former PM Atal Bihari Vajpayee had started, Modi was bent on concluding that job by selling Public Sector Undertakings (PSUs), increasing unemployment and making the country dependent on private players.

The central government claims it has no data on number of vacancies in the states. According to state budget documents, in Uttar Pradesh alone 13 lakh posts have been sanctioned, out of which more than 4 lakh are vacant.

Discussing government posts in the states, General Secretary of All India State Government Employees Federation (AISGEF), Subhash Lamba said that according to their estimates based on growth in population and the increase in corresponding work, more than 30 lakh posts are lying vacant across all states. “Due to such a large number of posts being vacant, various state governments are using contractual labour and such employees cannot provide satisfactory services because they are paid very low salaries and there is no job security,” he said.

In the last few years, a large number of employees have retired, due to which there has been a significant increase in the number of vacant posts because permanent recruitment has not been done against these vacancies. The vacant posts are those that were sanctioned keeping in mind the needs long ago; at present, when there is a lot of increase in the population, there is a need to increase the number of sanctioned posts as well. Lamba says that in view of the current population and work, about 15 to 20 lakh new posts should be created in the states.

WHY PERMANENT APPOINTMENTS ARE IMPORTANT

The corona pandemic has proved that only the government machinery can firmly fight the battle during any crisis. Essential services like sanitation, healthcare, police, and banks, etc. were continuously available to the people mainly because of government employees. The private sector was not visible anywhere and whatever was working, was devoted to minting money. Due to the lack of employees and facilities in the government system, common people could see some hope.

The most shocking number of vacancies from key sectors such as education and health are due to low funding and fund cuts leading to the disappearance of lakhs of teachers from schools and colleges, and even from reputed institutions like IIMs and IITs. This underlying weakness in education system is putting the future of India at great risk and darkness.

An equally careless approach is visible in the National Health Mission program, which is the main program providing health services to the Indian people. The Rural Health Survey states that 1.68 lakh posts are vacant for key health workers including specialists, general practitioners, nurses, technicians and other paramedical staff. Apart from this, there are 1.76 lakh vacant posts of Anganwadi workers and helpers, who provide nutrition and child care services, are not appointed. NFHS-5 data show that there has been an increase in the number of stunted (short height for age), weak (low weight for height) and malnourished (low weight for age) children in the last five years. The lack of appointments in judiciary and courts is reflected in 4.28 crore court cases that are pending in the whole court system.

Development Economist Deepa Sinha says given the condition of the country, it would be a great step forward to fill up the vacant posts right now because there is a demand deficit, people do not have jobs, and these posts which are lying vacant, belong to employees of every level. And if these people get money in their hands, then spending will increase. Since the things these people buy are not very expensive or imported things but local things, which will in turn increase employment and boost the economy. .

Sinha further elaborated that right now the government is talking about giving relief package in the Covid-19 period, but only the corporates will benefit the most from it. However, if the economy is to be brought back on track, then filling the vacant posts without delay is the right way, she added.

Preeti Shekhar, National Vice President of the Democratic Youth Federation of India (DYFI), said that when such a large number of people are unemployed, then it is unfortunate to have so many posts lying vacant. Describing unemployment as an epidemic, she said all sections of the society are affected due to this situation. According to her, ever since 1990-91, when the new economic policy was introduced in the country, the governments have started to believe that keeping people on regular jobs is not required. “These vacant positions are part of the same neoliberal policies,” she said.

On the other hand, Anupam, the national coordinator of Yuva Halla Bol, said that the huge number of vacant posts was not just an administrative glitch or flaw, but it was the unofficial policy of the government that the posts should not be filled while a large youth population is facing unemployment. If there was a sensitive government, which would understand the problem of the youth, it would not only recruit the sanctioned posts on a war footing but also would have created new posts as per the need, he said.