Respected Comrade,
This has a kind reference to the Directorate letter under reference (Copy attached for ready reference) with instructions for temporary redeployment of 40 HSG-I NFG posts with effect from 01.08.2020 in 3 Circles by diversion from 12 Circles.

In our opinion, the order is quite arbitrary and against the interest of the General Line officials of 12 Circles from where the posts are diverted. Though we have no objection to give benefit to all eligible officials in the cadre, it is not at all a reasonable decision to give benefit to 3 Circles at the cost of 12 Circles. Many eligible HSG-I officials who were in the line of promotion since long and could not be promoted in time to NFG Cadre with heavy financial loss only due to the merger of the Postmaster Cadre with the General line will now be deprived of the benefit for no fault of their own due to the above arbitrary order.

In this context, it is worth mentioning here that from the beginning of the Cadre Restructuring proposal for Group-C postal employees, the Staff Side is demanding promotion of all HSG-I officials completing 2 years of regular service in the cadre to HSG-I NFG. But, instead, the Department restricted it to 235 posts only which is not seen in any other cadre availing NFG.

In addition, we do not agree with the instructions of the Directorate telling it as temporary redeployment since such posts are ordered to be redeployed up to 7 years 9 months in Maharashtra Circle, up to 7 years 3 months in West Bengal Circle and in many cases more than 5 and 6 years.

How can we treat such a longer period as temporary?

While Maharashtra and West Bengal Circle are worst affected with diversion of 9 posts each, one post each from J & K, Jharkhand and North East, 2 posts each from Assam, Gujarat and Odisha, 3 posts each from Bihar and Kerala and 4 posts from MP Circle will be diverted to give benefit to the erstwhile Postmaster Grade – III, now HSG-I of Andhra Pradesh, Karnataka and Himachal Pradesh. We strongly object such diversion of posts from the above 12 Circles and redeployment of the same in 3 Circles.

Under the Circumstances, we would like to suggest for appraising the Directorate immediately as follows.

1.    To reconsider our proposal for promotion of all HSG-I officials completing 2 years of regular service in the cadre to HSG-I NFG, or

2.    To increase the number of HSG-I NFG posts proportionately after merger of Postmaster Cadre with General Line and promote all eligible HSG-I officials to HSG-I NFG and allow stepping up of pay of the senior officials who will still be deprived of getting promoted to NFG Cadre.

3.    To keep the present order in abeyance until a final decision is taken for extending equal benefit to all such officials.

Attached : As above
Comradely yours, 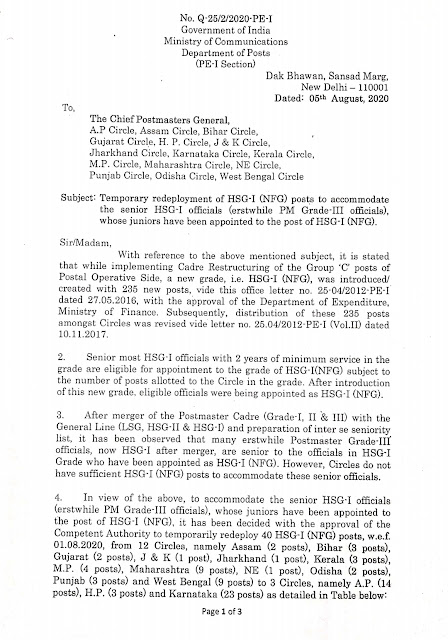 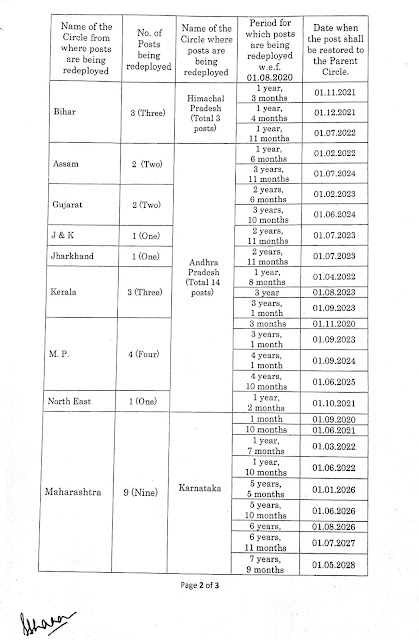 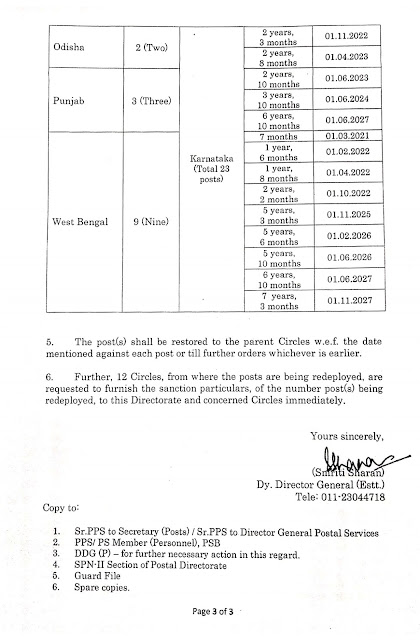