Bern, 9 October – In a virtual ceremony held at the Universal Postal Union’s headquarters in Bern, Switzerland today, the UN agency for postal matters celebrated World Post Day with a series of high-profile events. 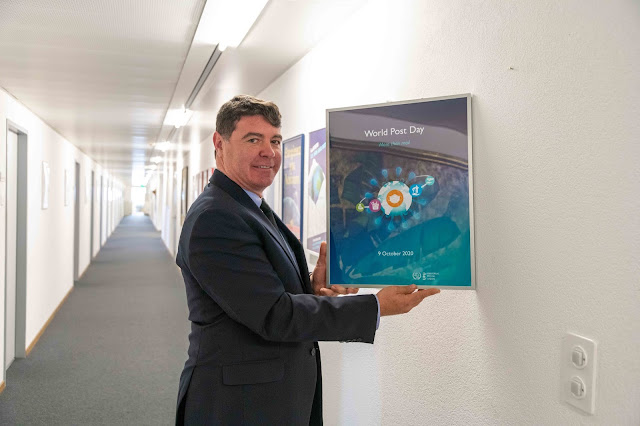 The UPU’s Director General Bishar A. Hussein unveiled a plaque and led a moment of silence for postal workers who had died due to the COVID-19 pandemic.

“Today is the day – World Post Day – when we should commemorate their bravery and courageousness, and in doing so, recognize them for what they are: heroes. I offer my sincere condolences to their families, friends and loved ones.”

Postal workers are considered an essential service in many countries alongside police, health and sanitary workers. The commemorative plaque will hang in the main conference hall at the UPU’s headquarters.

Volga’s letter was one of more than a million entries, although this year fewer countries took part due to the COVID-19’s impact on the school year. “Today I am proud to have represented our country, and I succeeded,” Volga said.

Following a musical interlude, which included a medley of songs, related to posts, the UPU announced the winners of its Integrated Index for Postal Development 2020 (also known as 2IPD).

Speaking about Swiss Post’s success, Mr. Hussein described Swiss Post as a beacon for the rest of the international postal sector.

In a statement at the closing, the Deputy Director of the Universal Postal Union Pascal Clivaz discussed postal development and multilateralism’s importance.

“As we celebrate our birthday today, I want to say how proud I am that we are part of the UN family and how—in the best spirit of the United Nations—we will continue to add our voices to the UN for the cause of multilateral solutions to all global problems,” he said.

About World Post Day
World Post Day is celebrated each year on 9 October. The event was declared by the 1969 Universal Postal Congress in Tokyo to mark the anniversary of the Universal Postal Union's (UPU) creation in 1874. The purpose of World Post Day is to bring awareness to the Post's role in the everyday lives of people and businesses, as well as its contribution to global social and economic development. The day is celebrated by postal operators across the world.
About the International Letter-Writing Competition

The ILWC encourages children aged 9-15 to write a letter about a different theme each year. The aim is to improve literacy through the art of letter writing and to encourage participants to express their creativity and refine their language skills. This year’s theme was to “write a message to an adult about the world we live in.”

About the Postal Development Report 2020

The Postal Development Report benchmarks postal development around the world—a crucial topic owing to the important role played by the postal sector in promoting socio-economic development and helping to achieve the 2030 Agenda for Sustainable Development. The analysis for the Integrated Index for Postal Development (2IPD), which is part of the overall report, draws on a wide range of postal (big) data from numerous sources to provide a composite picture of postal development in 170 countries.
****
The Universal Postal Union is a UN specialized agency with its headquarters in the Swiss capital Berne. Established in 1874, it is one of the world’s oldest international organizations and is the primary forum for cooperation between postal sector players.
Posted by AIPEU Group-C, Odisha at Monday, October 12, 2020