Write me a letter 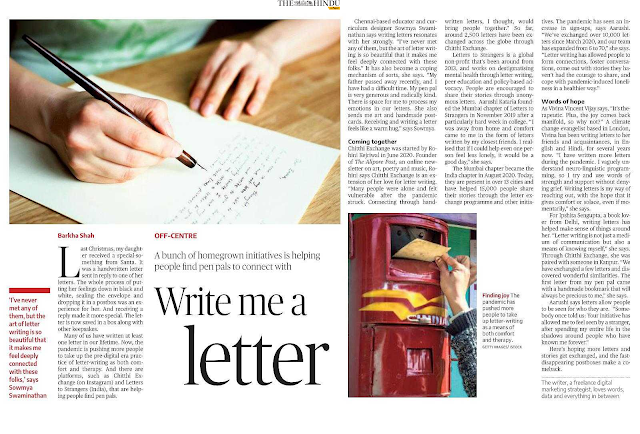 Finding joy The pandemic has pushed more people to take up letter-writing as a means of both comfort and therapy. Getty Images/ iStock

Last Christmas, my daughter received a special-something from Santa. It was a handwritten letter sent in reply to one of her letters. The whole process of putting her feelings down in black and white, sealing the envelope and dropping it in a postbox was an experience for her. And receiving a reply made it more special. The letter is now saved in a box along with other keepsakes.

Many of us have written at least one letter in our lifetime. Now, the pandemic is pushing more people to take up the pre-digital era practice of letter-writing as both comfort and therapy. And there are platforms, such as Chitthi Exchange (on Instagram) and Letters to Strangers (India), that are helping people find pen pals.

Chennai-based educator and curriculum designer Sowmya Swaminathan says writing letters resonates with her strongly. “I’ve never met any of them, but the art of letter writing is so beautiful that it makes me feel deeply connected with these folks.” It has also become a coping mechanism of sorts, she says. “My father passed away recently, and I have had a difficult time. My pen pal is very generous and radically kind. There is space for me to process my emotions in our letters. She also sends me art and handmade postcards. Receiving and writing a letter feels like a warm hug,” says Sowmya.

Chitthi Exchange was started by Rohini Kejriwal in June 2020. Founder of The Alipore Post, an online newsletter on art, poetry and music, Rohini says Chitthi Exchange is an extension of her love for letter writing. “Many people were alone and felt vulnerable after the pandemic struck. Connecting through handwritten letters, I thought, would bring people together.” So far, around 2,500 letters have been exchanged across the globe through Chitthi Exchange.

Letters to Strangers is a global non-profit that’s been around from 2013, and works on destigmatising mental health through letter writing, peer education and policy-based advocacy. People are encouraged to share their stories through anonymous letters.  Aarushi Kataria founded the Mumbai chapter of Letters to Strangers in November 2019 after a particularly hard week in college. “I was away from home and comfort came to me in the form of letters written by my closest friends. I realised that if I could help even one person feel less lonely, it would be a good day,” she says.

The Mumbai chapter became the India chapter in August 2020. Today, they are present in over 13 cities and have helped 15,000 people share their stories through the letter exchange programme and other initiatives. The pandemic has seen an increase in sign-ups, says Aarushi. “We’ve exchanged over 10,000 letters since March 2020, and our team has expanded from 6 to 70,” she says. “Letter writing has allowed people to form connections, foster conversations, come out with stories they haven’t had the courage to share, and cope with pandemic-induced loneliness in a healthier way.”

As Vivina Vincent Vijay says, “It’s therapeutic. Plus, the joy comes back manifold, so why not?” A climate change evangelist based in London, Vivina has been writing letters to her friends and acquaintances, in English and Hindi, for several years now. “I have written more letters during the pandemic. I vaguely understand neuro-linguistic programming, so I try and use words of strength and support without denying grief. Writing letters is my way of reaching out, with the hope that it gives comfort or solace, even if momentarily,” she says.

For Ipshita Sengupta, a book lover from Delhi, writing letters has helped make sense of things around her. “Letter writing is not just a medium of communication but also a means of knowing myself,” she says. Through Chitthi Exchange, she was paired with someone in Kanpur. “We have exchanged a few letters and discovered wonderful similarities. The first letter from my pen pal came with a handmade bookmark that will always be precious to me,” she says.

Aarushi says letters allow people to be seen for who they are.  “Somebody once told us: Your initiative has allowed me to feel seen by a stranger, after spending my entire life in the shadows around people who have known me forever.”

Here’s hoping more letters and stories get exchanged, and the fast-disappearing postboxes make a comeback.

The writer, a freelance digital marketing strategist, loves words, data and everything in between.