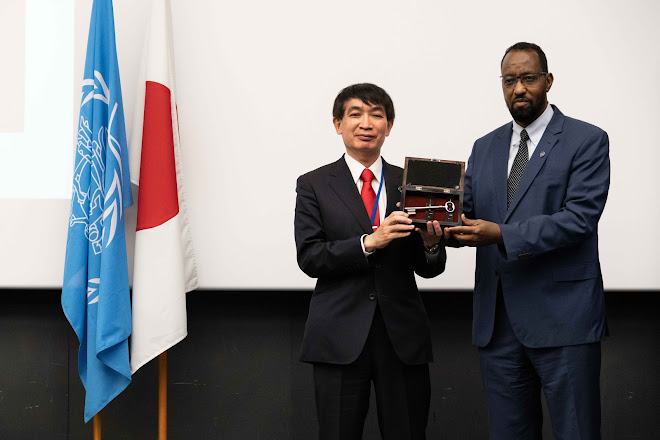 The ceremony included the reading of the official UPU oath by the Director General and Deputy Director General, as well as the exchange of the key to the International Bureau – the UPU’s headquarters and seat of its international secretariat.
Speaking during the handover ceremony, the Director General said, “Throughout my term, I will do everything possible to strengthen the ties that bind us closely together.”
“Although symbolic, this key has tremendous significance. If we work in an effective and efficient manner, we can collectively unlock success for the entire postal industry,” said Mr Metoki.
Referring to the postal strategy guiding his term in office, the Director General said, “It sets out a vision of the Post as an essential engine for sustainable development and invites governments to do everything possible to reduce the gaps in postal development around the world … As Director General, I pledge that I will work in all sincerity with member countries to make this strategy successful.”
The Deputy Director General added, “During my term in office, I encourage the responsible owners [of the Post] to define the role of the Post in their environment and to support its development. The Universal Postal Union will thus guide, coordinate and help members to enhance the quality and importance of postal services.”
Isaac Gnamba-Yao, who represents Côte d’Ivoire as Chair of the UPU’s Council of Administration, also presided over the ceremony. Welcoming the new leadership team, Mr Gnamba-Yao said, “All the member states have witnessed your commitment to continue the work of reforming the postal industry and to rise to the challenges that it faces, with the inclusion and participation of all member countries.”
Expressing his congratulations to the incoming team, former Director General Bishar A. Hussein said, “I wish to call on member countries and the International Bureau staff to support the two leaders and enable them to continue with their momentous task of transforming this organization to address the demands and the dynamics of the ever-changing postal market.”
On completing his mandate as Director General, Mr Hussein added, “We were able to live up to the expectations of member countries, we were able to uphold their trust and deliver with dignity and respect.”
Mr Clivaz said it had been “an honour” to serve the UPU over the past nine years.
“I have used my competencies to serve the UPU and bring about reforms,” he said. He added that it would now be up to Mr Metoki and Mr Osvald to take up the challenge. “It is not an easy position, but I have no doubt in your ability to overcome the difficulties,” he said.
Earlier in the day, Mr Metoki and Mr Osvald were welcomed by Mr Hussein and Mr Clivaz and the International Bureau’s senior management team upon their arrival to the headquarters. They also met with the media at a press breakfast to speak about their plans for the UPU over the next four years.
Mr Metoki and Mr Osvald officially began their respective mandates on 1 January 2022. They were elected by member countries during the UPU’s 27th Universal Postal Congress in Abidjan, Côte d’Ivoire, in August 2021.
Ahead of his election, Mr Metoki served as the Senior Vice President of International Affairs at Japan Post and represented Japan as Chair of the Postal Operations Council from 2012 until 2021. Mr Osvald previously served as Director of International Mail at Pošta Slovenije, but has also worked to coordinate developments across the sector through his involvement with PostEurop, the Postal Union for the Mediterranean and the International Post Corporation.
Read the Director General's speech here.
Read the Deputy Director General's speech here.
Watch the official welcome here.
Source : https://www.upu.int/en/News/2022/UPU-welcomes-new-leadership-team
Posted by AIPEU Group-C, Odisha at Thursday, January 06, 2022