IPPB personnel apologized for their abusive message posted in WhatsApp group against the Leader, RJCM (Staff Side), Odisha Circle

Step By Step Updates
Dear Comrades,
You might have gone through our letter written to the Chief PMG, Odisha Circle on 16.05.2020 (Posted in website on 17.05.2020) endorsing copy to our CHQ and NFPE regarding misbehaviour and high-handedness of the IPPB personnel to DOP staff members.  As already informed, I had also a discussion on the issue with Com. R N Parashar, Secretary General, NFPE on 17.05.2020 at about 8.40 PM with positive assurances and accordingly NFPE wrote a letter on 18.05.2020 to the Secretary (Posts) threatening to the Department to go for agitation if the misbehaviour and authoritarian activities of IPPB people are not restricted. The above letter of NFPE has already been posted in our website.

At 10.47 AM on 18.05.2020, the AGM, IPPB Ltd. Bhubaneswar called over telephone and apologized for the impolite words used by his staff members in the WhatsApp group. We simply asked him to condemn such activities of his members officially and ask all his three staff members to prefer written apology through Chief Postmaster General, Odisha Circle. He guaranteed to do so for the two personnel played in the WhatsApp group as and when asked officially by the Circle Office. But for the Area Sales Manager, Jagatsinghpur, as informed, he has requested the SPOs, Cuttack South Division for initiating inquiry since the former has also lodged a complaint against our SPM and Divisional Secretary, Com. Swaroop Khara. We cleared him that the complaint lodged against Com. Swaroop Khara is an afterthought issue and a manufactured one intended to satisfy personal vindictiveness of someone who was not interested to see Com. Khara as the Divisional Secretary during the last Divisional Biennial Conference where we were present as the Circle Secretary-Cum-Chief Speaker and thus now trying to use this Area Manager as a weapon to harass him. If things go out of control and any harm is done to Com. Khara intentionally, then the Circle Union will not sit silent and expose those people who are involved in such anti-employee activities in addition to giving justice to Com. Khara. However, we may withdraw our complaint provided the Area Sales Manager, Jagatsinghpur preferred a written apology to Com. Khara for her high-handedness and authoritarian attitude. The AGM, IPPB Ltd. Bhubaneswar replied to do so after the inquiry is completed.

At 11.00 AM (18.05.2020), the Chief PMG called over telephone and he was also briefed on the unfortunate issue. We categorically repeated that the two IPPB personnel have disregarded the highest decision making platform of Odisha Circle, i.e. RJCM whose Chairman is the Chief PMG. “Whoever he or she may be will never be spared at the cost of the pride and prestige of the Union”, we told. We also tried to make him understand the reasons of our protest against mandatory opening of IPPB Salary Account to which the IPPB people has no business. It is after all a discussion / negotiation in between the Union and Administration to which the IPPB is a third party. The Chief PMG suggested me to cool down and concentrate on my work with assurance to take proper action in this regard.

Subsequently, we got the response of the Circle Office in this regard vide C O letter No. SB/52-52/2015, dated 19.05.2020 taking up the case with IPPB authorities who were also reminded on 21.05.2020. Both the letters have already posted in our Circle website and different groups.

Now, the Apology Letters of both the Area Sales Manager, IPPB Ltd., Rayagada Division and the Sr. Branch Manager, IPPB Ltd., Dhenkanal Division addressed to us endorsing copy to the Chief PMG have been received in the meantime. The receipt of the same by Circle Office was also confirmed. Since the matter was posted in an unofficial group to which the Circle Office has no control in any manner, let’s accept the said letters which are reproduced below for the kind information of our members. 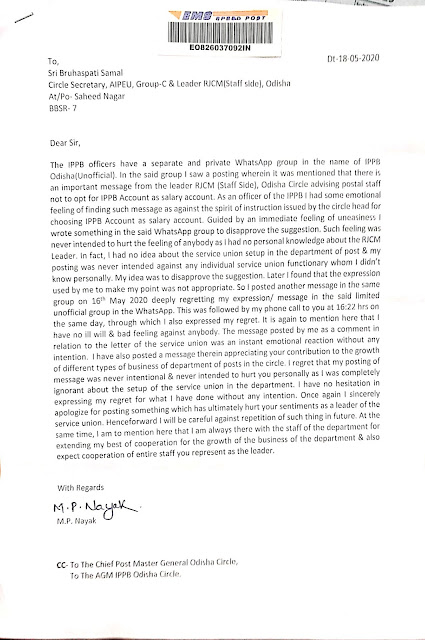 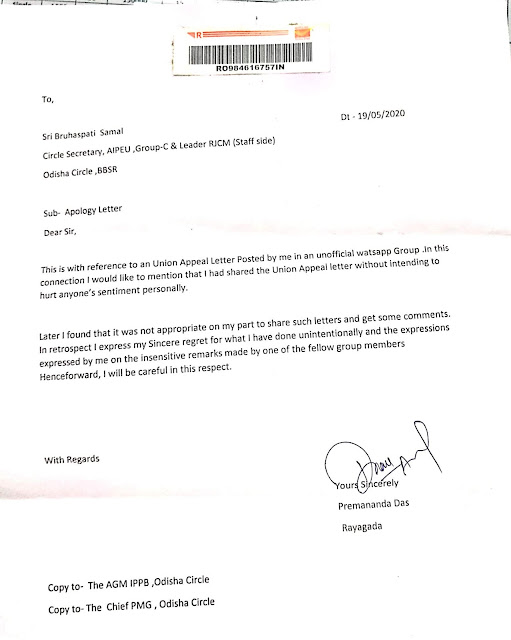 With every humility, we would like to humbly submit that we were not at all interested either to take any credit or to feel proud by compelling some people to apologize. We were not also intended to take any kind of revenge on anybody.  Our only intention was to make them realize the presence of Union and the importance of its highest forum i.e. Joint Consultative Machinery (JCM) which is Holier-Than-Thou. It should be understood that Union is not there to confront only but to contribute constructively for the welfare of the Department and its employees. There should not be any kind of misunderstanding in future. We are forgetting the differences and appeal our members to forgive both of them to close the ‘Case No-1’.  Let’s wait for the responses of Case No.2 from all concern to take a decision on merit.

Few Words for the IPPB people

In this context, we should state that after we have initiated this issue from Circle to Directorate, now several instances of misbehaviour and high-handedness of IPPB people to our staff members are being intimated to us. The IPPB people are of a notion that the postal employees are only union oriented and do not work for which the Department is in loss and IPPB Ltd. came to floor. As alleged by them, we people have no banking knowledge. Thus, while the efficiency of our committed workforces has been questioned by the IPPB people with allegation against the Union, the situation forces me to say the following few words for the information and knowledge of the IPPB people.

Dear IPPB Personnel,
We are confidently saying that you people know very little about our 166 years old glorious Department and its historical journey from manual to digital and from Pigeon Post to ePost. Your official existence starts during 2018 and we are there officially since 1854. The contribution of the committed workforce of India Post in nation building is par excellence. They are serving this land of heterogeneous racial, lingual, religious and social culture upholding its rich cultural heritage through religious pluralism with Hindus, Muslims, Sikhs, Christians, Budhists, Jains etc. They not only just distribute letters and money orders with a human touch, but share their sorrows and happiness in more than 19500 mother tongues inclusive of 22 scheduled languages protecting the national unity, social cohesion, secular and federal structure and democratic ethos of this sub-continent. Competently assisting the rulers, elite and mercantile community in its various forms in ancient and medieval times, it has conveniently served both the British rulers and general public in modern times as a forceful organization in raising national and political consciousness long before the times of eMail and mobile phones. Prior to independence, India Post, through a limited work force could be able to develop a vast network  of communication even before the Railways and Telephones were introduced with wide spread impact on  the socio-economic life of the nation through efficient and prompt service. From 23,344 post offices primarily opened in urban areas prior to independence catering to the needs of Britishers for development of their trade and exercising control over their vast Indian possessions, India Post has now registered nearly a seven fold growth during the period of last seven decades with 1.55 lakh post offices focusing its expansion to rural areas and thus has been acknowledged as the largest postal network of the world providing  postal facilities within reach of every citizen in the country at affordable prices adopting every mode of transmission from bare foot to air route.

And honestly, you were not there at all in any manner with the above journey and achievements. These committed workforce of India Post can do anything / everything anywhere / everywhere and take India Post to a new height without your support, which they have proved   severally in all fields before your existence. We have nothing to learn from you regarding dedication, sacrifice and commitment towards the Department. Rather, you have to learn a lot from our devoted workforce for the growth of IPPB Ltd. Any challenge to us is mere childish.

Secondly, you have also no knowledge above the glorious journey of P & T Trade Union movements, which originates since 1905. All the Service Unions / Associations / Federations including Trade Unions in India have learnt a lot from the historic journey of  this biggest platform i.e. National Federation of Post and Telegraph Employees alias National Federation of Postal Employees of India Post which is ultimately the largest postal network of the world. All the benefits, the Central Govt. employees and workers are enjoying now a day are the result of the struggles and sacrifices of these people. These committed workforce feel extremely proud to be a part of this glorious Department as well as this biggest platform because they have given their blood and sweat in strengthening this Department. You are quite unaware of the reasons of deficit with India Post now. So you should assess your contribution before comparing yourself with the workers and employees of India Post since these workforce are incomparable.

So, it is our suggestion to you all without throwing mud on the DOP staff members, just concentrate on your duties and responsibilities for which you have been recruited keeping in mind that you are not the boss of these employees having no right to be authoritative. Be friendly; adhere to professionalism with necessary marketing and soft skills for the growth of IPPB Ltd. Excessive dependence on DOP staff members and heavy intolerance towards them will yield nothing. We know our duties and responsibilities very well. In one line, we are too committed for the growth of this Department and welfare of its people.”

Few Words to our staff members

The issue originates from the VC dated 01.05.2020 where in the Secretary (Posts) has urged for opening of increasing numbers of IPPB Accounts ensuring door step banking through more and more AePS transactions during this national pandemic of COVID-19. You must accept and appreciate that our services at this critical juncture have been acknowledged widely and praised severally by the Hon’ble Prime Minister of India, Minister of Communications and Secretary (Posts) through video messages, twitters etc. and everybody in the hierarchy wants to take India Post to a different level winning the trust of the common citizens with effective service delivery of our valuable financial and mail products/services. And this lockdown period is the right time to prove our efficiency more effectively.  As responsible India Post employees, we should realize also the need of the hour and rise to the occasion.

The correspondences, discussions and tussles with the administration by the Union against the anti-employee activities, policy deficiencies and arbitrary decisions / orders should not be mixed up with our duties and responsibilities towards our Department which always requires our significant contributions in all fields with utmost sincerity, honesty, devotion, punctuality and dedication to achieve its goals and objectives, mission and vision for the existence of 1.55 lakh post offices and 5 lakh employees and workers. We have to proceed ahead accepting the changes and we are doing this most effectively also. There is no doubt about it. But with due regards to the rising expectations of the people, we have to be more active particularly at this moment when people need our services. We have to keep the goodwill of our respective Divisions and Circle as a whole. We cannot run away from our assigned responsibilities.

So, as duty-bound responsible India Post employees, you go ahead with your duties and responsibilities with deep faith on your leadership from Divisional level to CHQ you have elected. And we are confident that they will be always with you for all injustices done to you anywhere in any manner.