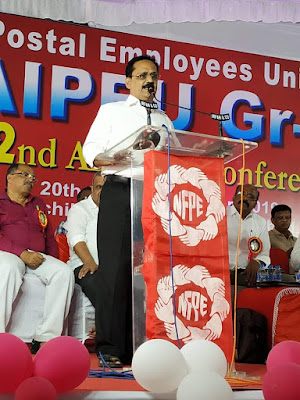 After that Floral tribute was offered to the martyrs. All Leaders present there paid their tribute by offering flowers on Martyr’s Column. 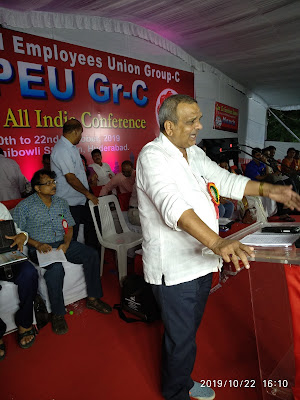 The open session was formally inaugurated by Com. Swadesh Dev Roy, National Secretary, Centre of Indian Trade Unions (C.I.T.U) in his speech he elaborated the issues related to working class peasantry and common man. How the Government policies are effecting the of Common man. The neo-liberal economic policies being pursued by the present Government are not in the interest of Common man whether it is Government Employee, Public Sectors Employee, State Government Worker or farmer. These policies have been framed to make the corporate Sector benefitted. The country is facing serious economic crisis and unemployment problem. He appealed the working class to fight unitedly to resist the retrograde economic policies of the Govt.

Shri P. K. Bishoi, Member (Personal) & Designated Secretary (Posts) also graced the occasion as Chief Guest. In his address he assured the employees to protect their interests and settle the problems which are being faced by the employees. He appealed to the Postal Employees to work in the interest of the Department.

Shri K. Nageshwar, Ex-MLC Telangana also delivered his speech and criticized the anti working class policies at present central Govt. He stressed the need to fight unitedly by all working class to resist the anti common man and pro-corporate policies of the Government.

Delegate session was started at 4 PM on 20.10.2019 after getting the agenda approved by the house Com. J. Ramamurthy delivered Presidential Speech.

Com. R. N. Parashar General Secretary initiated the discussion on agenda by narrating the present position on each issue.

All Circle Secretaries discussed the various issues notified in agenda in detail it went on upto 21st October A/N. After that delegates were called for to give their views on agenda items and the problems being faced by them at the ground level. 76 delegates took part in deliberation who gave an important feedback on the issues.

After that General Secretary summed up the discussion. He elaborately described each issue raised by the delegates and clarified the position of action taken by CHQ and the Department. He thanked all Leaders, Member (P) & designated, Secretary (Posts) Chief PMG Telangana and other officers who attended the open session. He thanked all CHQ office bearers, Circle Secretaries, Women Committee members, Divisional Secretaries and all delegates and visitors who attended the A.I.C. for their guidance and co-operation extended to run the affairs of CHQ. 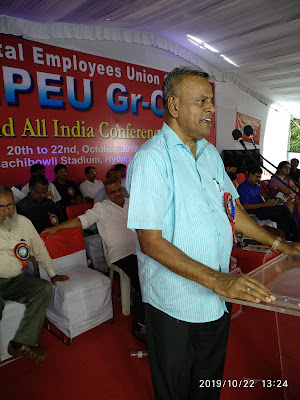 Special Thanks were given to Com. K. V. Sridharan Ex-General, AIPEU Group ‘C’ who has always extended his support, co-operation and guidance to the CHQ.

After that Credentials were readout. All delegates 711 out of 836 were present. All Circle Secretaries and CHQ office bearers were also present. The house was declared duly composed by the President and all business transacted was declared under composed house and approved by the house.

After that agenda items were got approved by the President one by one.

As per agenda elected of new set of office bearers was elected unanimously which is mentioned as under.

The session was presided by Com. G. Janakiram, Working President.