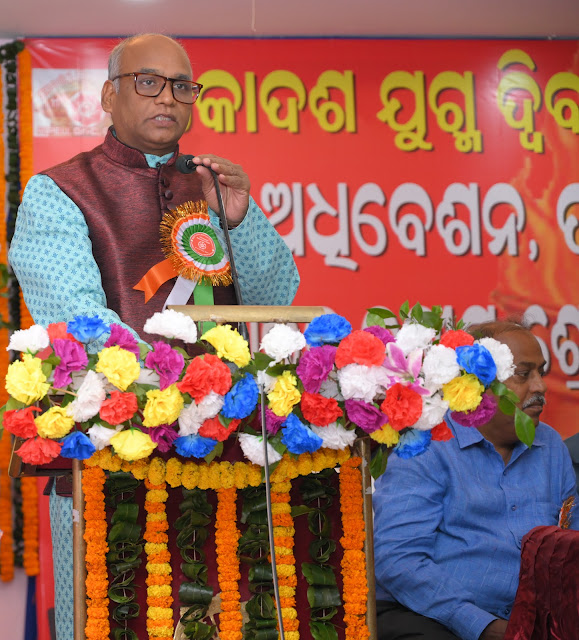 As recorded, this the 1st ever Circle Conference organized by Bhubaneswar Division under the present leadership of the Division headed by Com. Anil Kumar Mohanty Divisional President and Com. Dipti Ranjan Mohanty, Divisional Secretary.

This is also the 1st ever Circle Conference where all the 22 Divisions have participated with their delegates and Circle Councilors. Except one Vice-President, 14 Circle Union office bearers and the Auditor, all Divisional / Deputized Divisional Secretaries did participate in the conference with as many as 80 delegates and visitors. As many as 40 deliberations were delivered in the Subject Committee and Circle Council Meeting on 3rd and 4th December, 2021 with hundreds of constructive suggestions on all departmental and national / international issues including NFPE’s forthcoming strike programme during February, 2022 with 19 Point Charter of Demands and 35 Resolutions were adopted unanimously. A Technical Committee was constituted as follows to guide the Circle Union on all technical deficiencies noted so far under I T Modernization Project.

In spite of bad weather due to the cyclone ‘Jawad’ with heavy to very heavy rainfall and wind speeds ranging up to 90-100 kmph accompanied by tidal waves from Saturday (04.12.2021) morning almost in eastern part of Odisha especially in the capital city of Bhubaneswar, the participants continued to debate and discuss in a more vibrant manner till late night ending with the unanimous selection of a new set of office bearers for the ensuing session as follows.

Due to cancellation of flights and trains to / from Bhubaneswar for the probable serious effects of cyclone ‘Jawad’ on one hand and heavy rain on 05.12.2021, many guests, invitees, speakers and especially the members of Bhubaneswar Division failed to attend the Open Session of the Joint Biennial Conference.

Nevertheless, with the limited participants, the Open Session was started at 11 AM with hoisting of NFPE flag by Com. Trilochan Parida, Ex-President, AIPEU, Gr-C, Odisha Circle. The welcome address was delivered by Sj. Ananta Narayan Jena, Hon’ble MLA, Bhubaneswar Central. Inaugurating the Open Session, Com. Janardan Pati, President, CITU, Odisha criticized the policy deficiencies of Govt. of India causing unemployment, privatization, corporatization etc. Illustrating the victory of the Kisan Movement that was continued for one year and ended with victory compelling the Central Govt. to repeal the arbitrary Farm laws, Com. Pati told that everything is possible through continuous and united struggle. As an independent Federation, National Federation of Postal Employees should continue its struggle in such a manner to reach the goal without looking back taking all into confidence. Struggle needs to continue till goal is achieved. Describing the plights of the farmers, workers and employees of the nation under the present Govt., he stressed for united movement for truth and justice.

The Open Session was also addressed by Sj. Aditya Kumar Nayak, Hon’ble DPS (HQ), Bhubaneswar as Chief Guest who gave a clear picture of the Department at present and suggested all to work hard for revenue generation to save the Department.

Com. R N Dhal, General Secretary, Confederation of Central Govt. Employees and Workers, Odisha State CoC addressed the Open Session as Chief Speaker. Giving a clear picture of the struggles made by our forefathers viz. Babu Tarapada Mukherjee, Dada Ghosh and others whose dedication and sacrifices have given us all the benefits we are now enjoying as Central Govt. Employees starting from Fixed Duty Hours, Holidays, Dhoti / Grain Allowance etc. to TA, DA, Bonus, LTC, Festival and other Advances, and Central Pay Commissions etc., Com. Dhal categorically described the threats that are mushrooming over all the Govt. establishments in general and India Post and its employees in particular. He calls upon the rank and file to join the forthcoming 2 days nationwide strike during February, 2022 to achieve the 19 Point Charter of Demands.

All the invited guests and retired comrades were also felicitated by the Reception Committee.

The programme was ended with a colourful melody programme arranged by the Reception Committee where the family members of our comrades also participated.

With a weeklong hard labour and dedication of the Comrades of Bhubaneswar Division especially several committee members associated by the staff members of Hotel Keshari, the 3 days programme could be completed successfully.

On behalf of the Circle Working Committee, we would like to extend our heartfelt gratitude to the entire team of Bhubaneswar Division headed by Com. Dipti Ranjan Mohanty, Divisional Secretary under the able guidance of Com. Anil Kumar Mohanty, Divisional President for shouldering such a huge responsibility in organizing this Biennial Conference in Bhubaneswar. We are also thankful to both the Financial Secretaries, Com. Lingaraj Sahoo, Circle Financial Secretary and Com. Tapan Kumar Sahoo, Divisional Financial Secretary. We also express our sincere obligation to all those bonafide comrades who have left no stone un-turned including the staff members of Hotel Keshari, Bhubaneswar to make this Conference a grand success in all respect. We are also obliged to all those known/unknown personalities who have extended their moral, physical and financial support to organize this Conference successfully.